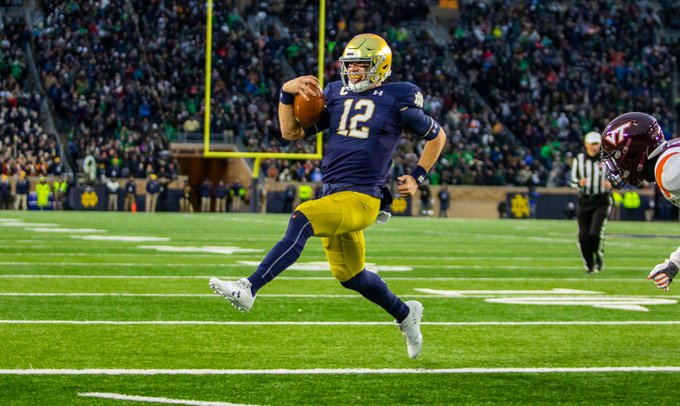 Let’s start with the obvious: that was not a very fun way to spend a Saturday afternoon. If you disagree with that sentiment— if you had a good time watching that game— more power to you. I had a bad time! But is a win ever not a win? No. I will cop to saying at some point early in the fourth that the result was nearly irrelevant, that the gameplan and execution was (on one side of the ball) so abjectly poor that a win would feel unearned and almost beside the point. But I was wrong, because here we are with a big fat W; one that’s hard to feel very good about, but a win nonetheless. A one point win isn’t an indictment of the program or “Kelly 2.0” or whatever you want to make it about, but it is a clear marker of where things need to improve (quickly, please).

That game looked like it was going to be 2011 South Florida, instead it turned out to be 2006 UCLA.

As expected, the defense bounced back after an abysmal performance the week before, throttling the Virginia Tech offense and their very large but equally inexperienced quarterback. The Hokies managed 101 rushing yards on 36 carries, generating a meager 2.8 per. Quincy Patterson didn’t complete even one third of his 28 pass attempts. There’s still so much to like about Clark Lea’s guys, and the numbers would have looked even better if not for a few careless penalties that extended VT drives.

If there’s one person I’m most frustrated with, it’s Lea’s counterpart Chip Long. He’s good for a clever play call when the situation demands it, but that was such an inconsistently called game, again, and a pattern is emerging. Sure, Long didn’t fumble on the goal line in a genuinely traumatic flashback to 2011, but he called that inside zone to Jafar Armstrong again and again with unsatisfactory results damn near every time. It feels like whenever Ian Book takes a designed roll to the right there’s at least one defender in his face, immediately, damn near every time. At some point that’s less of an offensive line issue and more of a reflection of the stubbornness of the offensive coaching staff to adequately correct the play design and help their players execute. The run on the final drive that gained what, two yards, and burned the final team timeout was inexcusably bad.

I do think without that goal line fumble the game ends up being immeasurably different and way less scary, but that’s not the world we live in. That it was the first fumble lost by a Notre Dame back in 1,273 carries is both insane and absolutely no comfort at all to a fanbase that’s been burned by that exact situation multiple times before. Bottom line, as Jamie Uyeyama put it, the Irish probably deserved to lose, but also should have won by three touchdowns, because that Virginia Tech team is not very good (although both squads arguably suffered from only being properly coached up on one side of the ball).

And sure, the Irish played down to their competition yesterday. But this narrative that’s being pushed (predominantly by random dudes in beat writers’ Twitter mentions, so…) that the team always does this is nonsense. As we noted in our game preview, since the 2017 Georgia defeat, ND had beaten unranked teams at home by an average score of 38-17. Stop being silly.

Let’s put this one to bed by toasting Ian Book, a kid who’s been through a lot and deserved every bit of that game-winning moment. Good for him for enjoying the hell out of it (and thank you Mike Miller for capturing it perfectly as seen above). The offense was nonexistent at times, and simply cannot afford to turn the ball over in the red zone like that for the rest of the year, but Ian accounted for 336 yards in the air, 50 on the ground, and another clutch winning score. Celebrating that touchdown with his teammates literally lifting him up and the stadium finally erupting should be enough to make even the iciest heart start to thaw.

And if the actual game ball went to the team, ours goes to Chase Claypool, who overcame a bad drop to start the final drive with one of the most physics-defying catches you’ll ever see. My man is gonna get paaaaaaaid. Honorable mention to Jay Bramblett averting disaster on the extra point hold, and to future and current Notre Dame legend Kyle Hamilton for closing things out by taking the team interceptions lead. All’s temporarily well that ends well. Beat Blue Devils.