One of the stories of Notre Dame’s 2020 offseason is the offensive production that the team will lose with the departures of Chase Claypool, Cole Kmet, Chris Finke, and Tony Jones. Every team gets hit by this kind of natural attrition (see week 6 opponent Wisconsin, which also loses its top running back and wide receiver), but that doesn’t mean replacing a couple surefire pro prospects and a couple more dependable contributors will be easy. Jones’ departure means there’s a starting RB slot up for grabs, but losing ⅔ of all catches, yards, and touchdowns through the air feels more worrisome. This is doubly true when considering that returning receiving yards most strongly correlates to a high-performing offense when compared to returning passing yards, rushing yards, and offensive line starts, per Bill Connelly’s SP+ metrics. 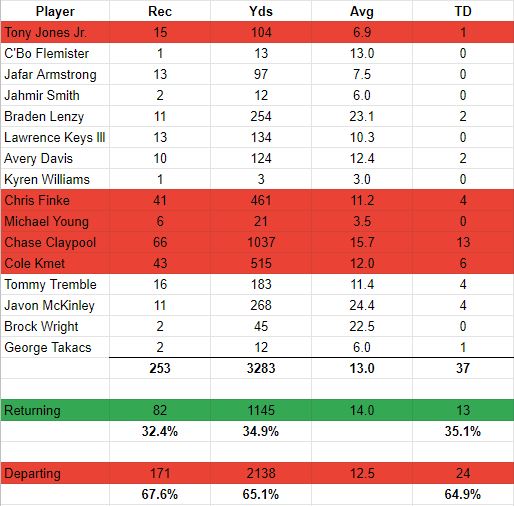 So Notre Dame’s leading returning receiver in terms of receptions is rising redshirt sophomore tight end Tommy Tremble. Javon McKinley totaled the most yards of the returning group, but his fifth year return isn’t a sure thing, so these numbers are all pending another potential material loss. Do the Irish have the horses to match the statistical output of the imperfect but largely effective 2019 offense? Recent history could shed some light.

One case that comes to mind is the 2018 team that lost 56.1% of its receiving yards from the prior year. That 2017 offense finished at #19 overall in SP+, but as the numbers bear out, it lacked a true go-to receiver like a ‘19 Claypool or ‘15 Fuller. Equanimeous St. Brown was the obvious candidate, but his production noticeably dipped (he led the team with just 33 catches — Brandon Wimbush really knew how to spread the love). Kevin Stepherson was explosive but only saw limited action (oh, what could have been). So what happened without those two and Durham Smythe? Everything turned on that midseason quarterback change, obviously, and the offense actually jumped 35 spots in the passing rankings. On the whole, the offense dropped 14 spots, but I’d argue that was more a function of losing the catalysts behind the #4 rushing offense than what we saw in the passing game. Alize Mack, Miles Boykin, Chris Finke, and Chase Claypool all rose to the occasion and contributed to a more potent air attack, one that was crucial in securing a year-over-year improvement of two wins.

The 2013/2014 offenses also offer up a useful test case. The Irish lost their top three receiving targets (T.J. Jones, Davaris Daniels, and Troy Niklas), who combined for a single catch more than 2019’s trio of Claypool, Kmet, and Finke (the former group was, however, considerably more explosive, having averaged 2.2 additional YPC — that’s a lot!). Turns out that a Will Fuller breakout season can cure most ills — the offense jumped 12 spots in overall SP+, and ticked up from 18th to 17th in passing game success. Unfortunately it goes without saying that this was an offense and a team that could have been a lot better if the travesty in Tallahassee didn’t ruin everyone’s psyches like a festering virus whose sole life objective was to torpedo a previously good squad’s final month or so, but oh well. Chris Brown, Corey Robinson, and Ben Koyack all took considerable leaps and kept the offense functioning at a high level despite the offseason turnover.

Two (cherry-picked) seasons that mostly flipped the script don’t negate that correlation between returning receiving output and predicted offensive performance. Far from it. But they do speak to the importance of continuous talent development, and show that Brian Kelly and his staff have, at least in these couple instances, been able to get the next wave of receivers ready to step in and perform above replacement level.

Frankly, there’s a bunch of open questions about next year’s corps, but I think it’s a group worth betting on. Questions include but are not limited to: can Kevin Austin develop into a reliable every down/every game target and leave a legacy that outdoes woulda-coulda-shoulda-been superstar Kevin Stepherson? How quickly will Tommy Tremble get up to speed as Ian Book’s top target at tight end? Will Jordan Johnson and/or Michael Mayer acclimate to the college game and make an impact as freshmen? Can Braden Lenzy build on a flashy first year and make a leap that at least bears a passing resemblance to the one Will Fuller made? What is Lawrence Keys’ ceiling, and where does Joe Wilkins come into play? (All of these pretty much amount to WILL THEY CATCH BALL GOOD but that’s sports for you, baby.)

None of these even touch on the elephant in the room that is the open coordinator position, but I’m honestly pretty bullish on most, if not all, of these open items. Austin is as talented as maybe anyone on the team, and has seemingly kept his head down and #trustedtheprocess through a season-long suspension that could have easily derailed his career in South Bend.  Tremble’s talent as a receiver is self-evident, and he made tremendous strides as a blocking tight end throughout 2019. Mayer has yet to enroll and there’s already talk of getting him significant snaps in Dublin. Lenzy’s got work to do in rounding out his game, but his opening act was unquestionably more impactful than Fuller’s.

One more reason to feel good about this all working out? Mr. 20-3 as a starter himself, Ian Book. He ended the season playing as well as he ever has, and has clearly developed a healthy rapport with Tommy Rees, who will likely be elevated to that coordinator role in some capacity. Book was more effective stretching the field in 2019, and during the back half of the year he displayed progress in the pocket that was clear to even an untrained eye. Can he do it against Wisconsin and Clemson? We’ll see. But the pieces are there.