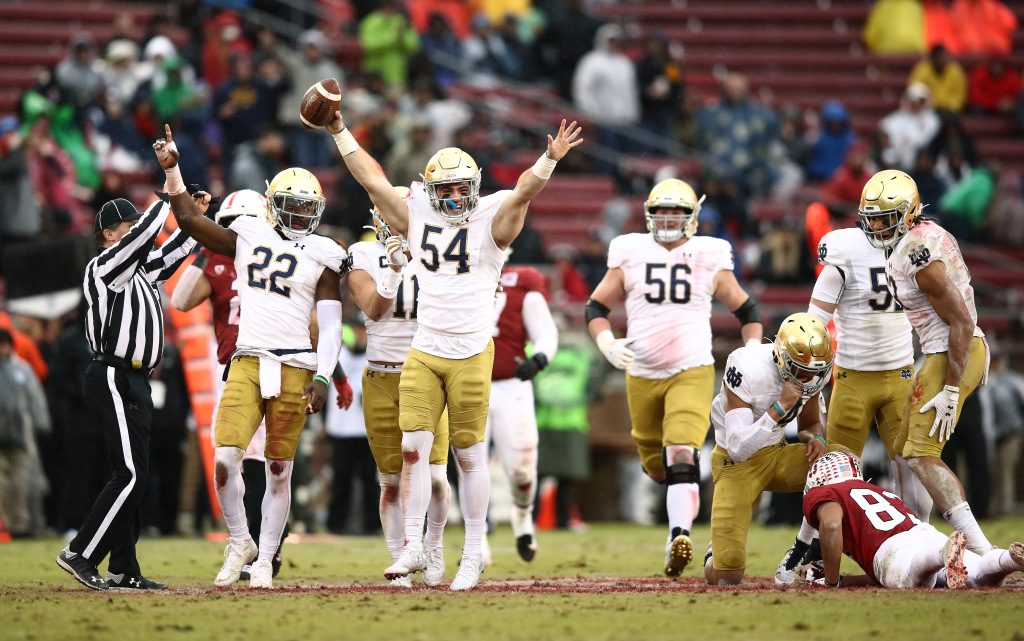 The push and pull live reaction during Notre Dame games where the Irish are favored by a healthy margin but struggle early and pull away late tends to follow a familiar formula. It starts on Twitter with bemused nihilism — “lol here we go again!” as a theoretically overmatched opponent marches right down the field and seemingly exposes the defense as frauds. Maybe the offense has an answer and things sort of calm down for a bit. Maybe they don’t. But sometimes the bad guys are able to stick around for a while, because they’ve also got some good football players who also want to win the football game. And even the most level-headed member of the fanbase (that’s me, of course) sighs at their television and shoots off a mildly panicked tweet about having seen this movie before.

But, more often than not, the Irish ride one or two breaks/big plays to an end result that was never actually in doubt. Those breaks aren’t often sparked by freshmen special teamers or long snappers, but hey, that’s the beauty of sports, and college football especially. And then the clearest heads of all tsk tsk your earlier posts of gloom and doom, you fool, how did you not see this coming! Things always work out for Notre Dame football!

But I’m not all that interested in binary. It’s true that Notre Dame opened the game at (horrifically, inexcusably sloppy) Stanford Stadium in front of announced crowd of 37 adoring fans looking like a sleepy and unfocused group. For a second there I felt naive for thinking this year at The Farm would be different. You were right to be annoyed at this good team not doing what it was supposed to do against the worst Stanford team in years. But you’d also be right not to panic, and to trust that the team with superior (and far healthier) players would prevail, despite what the program’s history in that stadium was trying to tell you. The breaks weren’t really beating the boys, but eventually they were able to stop beating themselves. In game 12 especially, that’s something to celebrate. Finishing the job is what matters.

One thing I didn’t love was forgetting where the team’s best player was for nearly a half of football. But then Chip Long and Ian Book remembered that they could simply trust Chase Claypool to be his usual self, and the tide turned. I didn’t love all those false starts — Jeff Quinn, seriously, what is going on — but as the Cardinal wore down, the line didn’t, and they were able to finally find their form in the ground game. I didn’t love the linebackers being out of position early and often, but of course that wasn’t going to last more than a quarter or so.

Some (mostly) unqualified good things: Jafar Armstrong looked the best he has all season, and if he can ride that momentum into another good performance in the bowl game I’ll feel a lot better about his future prospects (I let out an involuntary yelp when I first noticed the two back set with Jafar and Tony Jones). Cole Kmet was unstoppable, which he pretty much always is if the offensive gameplan wants him to be. Defensive line depth is hanging by a thread at this point, but they were quite good in the second half and played a big part in shutting down the Stanford offense.

Ian Book wasn’t flawless, but he did his job with both his arms and legs and mostly looked like the best version of himself that we’ve seen for the past month. And BRADEN LENZY, my goodness, just give the man jet sweeps and go routes until the sun collapses into itself, he’s so fun. It barely matters if defenses are prepared for him getting the ball in the backfield, he’ll run right by you anyway. For all its struggles, this offense will go down as a historic one, as they scored the most points in program history and averaged just over 37 per game (best in the Kelly era). Eye test be damned, that’s pretty good.

I’d like to echo the folks at 18 Stripes in my reaction to Notre Dame’s third straight ten win season:

Kelly has made winning 10 common enough that just doing it, in and of itself, isn’t enough. There are plenty of negative things you would be justified in saying about Kelly’s time at ND, but in my view this is the best thing that’s come out of it. Just 10 wins isn’t enough. This fan base is now hungry for more, and that’s a credit to him.

It’s okay to not be totally fulfilled by this season, it really is. The Irish beat a handful of good teams, but no great ones. I get that, and have next year’s Wisconsin and Clemson games circled in bright red on my calendar already. But the Irish have a chance to win eleven games for just the third time since 1993! That’s an indictment of past results, sure, but we’re in the midst of the best football this program has produced in decades, and you should at least take that at face value. Don’t let anyone tell you it doesn’t mean anything. There are still mountains to be climbed, but the journey’s been a good one for a while now. Don’t eat too many cheeseburgers between now and Orlando, and don’t forget that Stanford went 4-8.