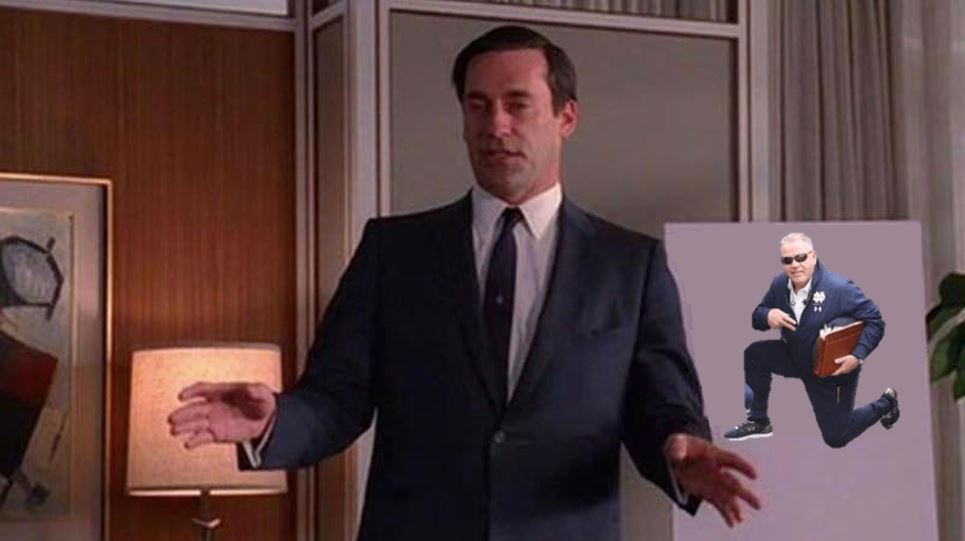 One strange feature of this college football season has been seeing high profile, notoriously cranky, and already extremely rich head coaches appearing in ad campaigns for brands of varying prominence. It’s nothing new — for example, Jim Harbaugh previously leveraged his weird steak and a tall glass of whole milk habit to promote Fairlife — but it’s still odd to see Harbaugh hocking detergent (because he’s a famous pants-wearer) and Nick Saban of all people giving up valuable ‘crootin time to sell insurance and yuck it up for the official bank of the SEC. Perhaps that helps explain why I had never heard of this particular bank.

While there’s an avenue of discussion here about how coaches are (rightfully) able to monetize their likeness while players are (wrongfully) not, I’d rather use it as an opportunity to punch up a few ideas for Brian Kelly, who has yet to appear in a national ad campaign. I get that these ads are often hokey and cringe-inducing, but hey, we’re fresh off an ACC Network broadcast and kitschy ads are on my mind. Brian, if you like any of these ideas, just have your people reach out to my people.

Now that I’ve spent an unacceptable amount of brain power thinking of these terrible ideas, please comment or Tweet us ideas of your own. Thanks.