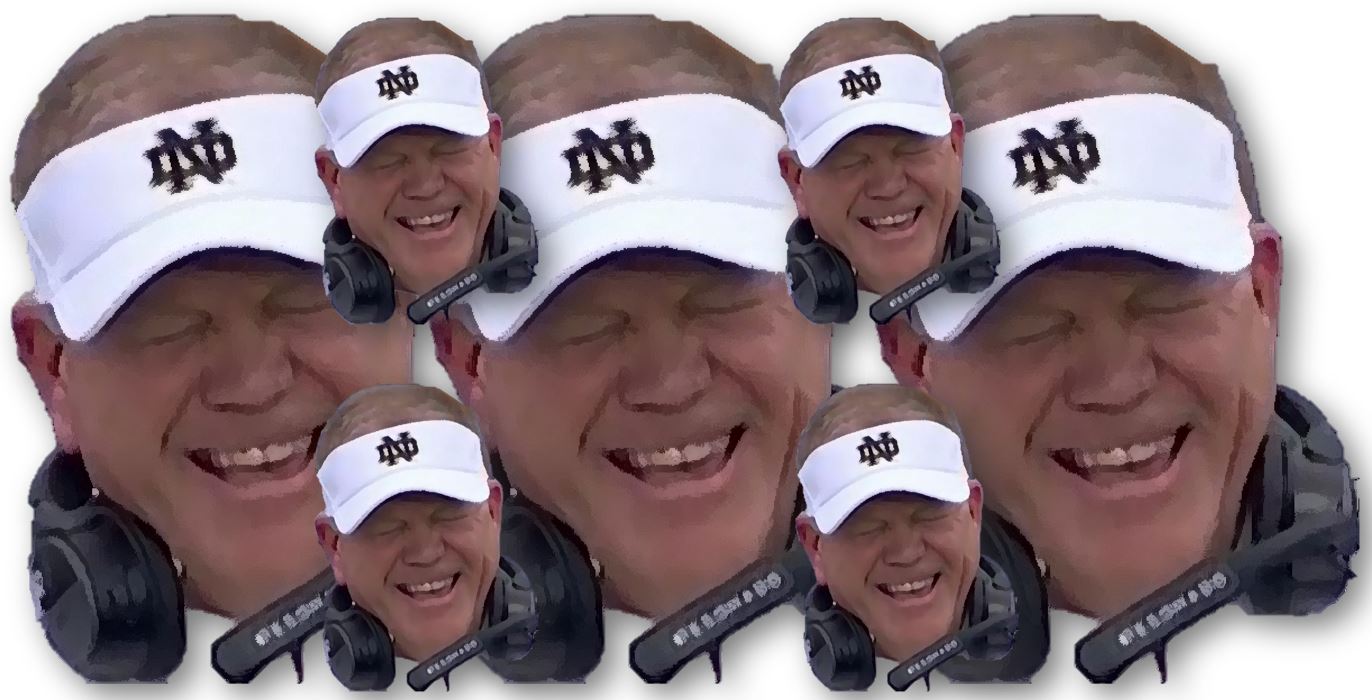 Mmmmmm…Tasty bowls of shit! Keep serving me more Brian & Jack! Enablers. Why didn’t NBC and Swarbrick go for the gusto and make this a night game? Talk about selling like hotcakes. Could’ve been a Shitrock Series. Nothing easy about brown and orange. It’s like self-flagellation by color choice. I have a foreboding about this game. Something awful is going to happen. We will be punished for playing them. I wish we were playing Purdue.

Was Brian Kelly trolling us? we were either unable or unwilling to establish the running game. his ignorance and arrogance are universal. Shit for brains. PJ is a better QB all the way around. It’s the duty of Pennsylvania men to lust after Phil. Phil Jurkovec > Chuck Norris.

The end zones look like fields of broccoli. BK tends to over fertilize it. Noticed a mum needs replacing at the 40.5 yard line. There was even an obviously single gay male cheerleader on the sidelines. Savvy can kiss my tan ass!

Any chance of a Snoop Dog halftime performance next week? Certainly that would make us forget Kelly’s crap play calling for a little while. I was sitting near a guy who was booing Chicago Sat. He was loudly cheering for ND for the first half. Seemed like he had a few beers. Then Chicago comes out and he just boos. Many people gave him dirty looks. Then he left with his gf/wife. My buddy hypothesized that maybe Chicago had gang banged his gf at one point. Seems like a reasonable assumption.

Maybe the boycott is finally taking hold. would you be worried if Kelly took the USC job? Worried? That’s my dream. The Trojan horse held the enemies of Troy. And his poop smells.

I wish we were in the Ivy League (if they’d let us in). We’d probably have to drop the Catholic thing. Do you think anything you don’t post? If you are worried about being taken seriously, you can get the fuck off this site any time you choose. Your editorial comments regarding this site and its patrons are not welcome. Furthermore, I don’t like you, and your continued participation here has been very tenuous for quite a while now. Is that clear enough for you?

Any injuries? I’m a little bloated. If anyone is curious I literally threw up my lunch of chili and beverage. Concussion from banging my head on the wall after 1st offensive series. May have to sit out the next game. Let’s leave your blow hole out of this.

Boy the way The Lads once played…

The mightiest foes of their day

They wouldn’t have it any other way

Those were the days

And they knew what they were then

Girls were girls and The Lads were men

Mister we could use a man like Joe Montana again

With Bowling Green or Podunk State

Never had that shit on our plate

Those were the days