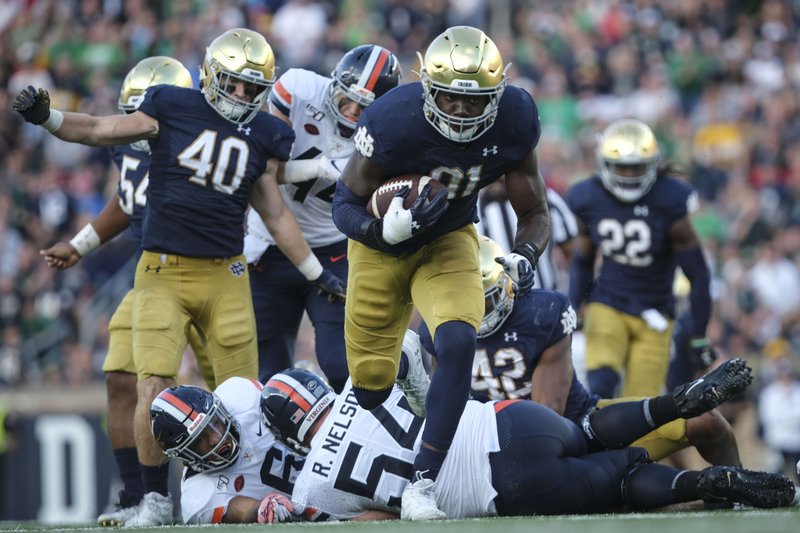 We’re a third of the way through the 2019 regular season, and it’s finally starting to feel like we might have more answers than questions about this year’s Notre Dame football team. The win against Virginia felt like the first contest that echoed last year’s quality wins against Virginia Tech and Stanford (throw in 2017 NC State for good measure) in which the opponent went blow for blow for a half and faded under the weight of the Irish in a smothering third quarter. It wasn’t the most explosive attack, but Bryce Perkins had his way with the Irish secondary in the passing game, until he didn’t, because the defensive line simply wouldn’t let him. This is the answer Notre Dame needed (especially with news breaking that Daelin Hayes is out for the year (hello, Jamir Jones)).

That defensive resiliency can’t be overstated. Brian Kelly teams of yesteryear might have flirted with disaster in a game like that one, but Clark Lea’s defense wouldn’t think of it. Virginia’s o-line is far from a top tier unit, but eight sacks and five forced turnovers are positively gaudy havoc numbers. Julian Okwara and Khalid Kareem’s (overdue) coming out parties are the clear story, with 5.5 sacks between the two, but everyone got in on the action, with notable strong efforts from Jacob Lacey, Kurt Hinish, and Adetokunbo Ogundeji. It’s not often that we’re blessed with multiple big man fumble recoveries and returns in one game, so shout out to Ade and Myron Tagovailoa-Amosa for showing off their best Stephon Tuitt impressions.

Let’s also talk about how Notre Dame decisively, unequivocally won in the run game on both sides of the ball. Since we’re in a generous mood, Virginia’s rounded up rushing YPA was a still-hilarious 0.14. The Irish averaged a hair over 5, not world-beating but certainly encouraging, especially when the touchdown margin was 4-0 in our favor. Tony Jones did everything that was asked of him and more, averaging over 7 yards a pop and easily breaking the century mark. C’Bo Flemister also flashed enough elusiveness to ensure that he’ll keep getting touches moving forward, a welcome development at a position where playmakers are needed. In the early goings, the backs weren’t quite finding the holes the line was providing, but Jeff Quinn’s group kept doing its job (against a previously stout front seven) and eventually the dam broke.

We also need to have a moderately uncomfortable conversation about Ian Book. He did complete 68% of his passes, and didn’t turn the ball over, but his awareness in the pocket remains very concerning. If he continues to have happy feet even in clean pockets, leading to missed opportunities down field because he bailed on the play too early, this team could easily lose a game it should win. And despite that very solid completion percentage, he was about a foot off on several important throws, including a couple screen passes that were nowhere close to working. It’s not like he has an elite group of skill players to distribute to, but that doesn’t feel like the problem here. Hopefully this is more of an open question than a resolved answer.

What else is there to be concerned about? The secondary didn’t have an answer in the first half hour (USC 2018 vibes for sure), special teams finally had that brutal performance we were all kind of expecting, and Chris Finke is simply not what he needs to be right now. Will all that last? Lea should have this group ready for whatever quarterback Southern Cal is able to throw at us in a couple weeks. Special teams won’t necessarily be a strength, but should more or less revert to form. As for Finke? It’s a mystery. The former walk-on was never going to out-athlete opposing defenses, but his performance so far this year certainly has a scary mental aspect to it, as evidenced by that awful muffed punt. If there’s an answer, it’s to ramp up Michael Young and get Finke back in the slot where he can thrive. This offense needs it (it also needs to stop moving before the snap, good god).

So we’re left with an up and down team, but when aren’t we, it’s college football. They know how to own the second half against teams that don’t have quite the same talent level. It’s yet another win at home, notably another one against a ranked opponent. They’ve produced the best turnover margin in the country (+9) through four games. After next week’s BVG catharsis, there’s a chance to beat Southern Cal and Michigan back to back (with a bye in between), which, after a cursory glance, seems like it might be a first for the program? That’s a hell of an opportunity, and it’s very much within reach.