We launched this site with an ode to Notre Dame football failings, reflecting on the games that made us reconsider sports fandom in general and specifically why we care so much about this occasionally godforsaken team. There’s a kind of poetic value in exploring those depths, but there’s definitely more beauty in the good times, so we’re gonna do a way more fun sequel and write about those now. These are some of the games that validated years of gloom and mediocrity and postseason disappointments. Sometimes, we can have nice things.

Three months had passed since my peers and I walked out of Notre Dame Stadium as graduates, and I wasn’t particularly close to letting go. A new job that was supposed to send me somewhere within driving distance of South Bend had instead led to El Paso, Texas for a year-long rotation, leaving me with a plentiful supply of the best tacos I’d ever eaten and a significantly impaired ability to make it to home games on a whim. A tight schedule meant I couldn’t take a day off, and short notice meant the Friday red-eye would cost me [redacted]. Oh well! All my friends were going, and I had to go too.

That Saturday morning I putzed around for a few pre-dawn hours at Midway, took the early Coach USA bus to campus (never again), and showed up surprisingly ready to tailgate around 9. Thankfully, the game itself was as fun as the long day in the parking lots preceding it. Malik Zaire had his one shining moment in an Irish uniform, doing everything right while relying heavily on the services of Big Bill Fuller. The rushing duo of C.J. Prosise and Josh Adams reared its beautiful head. The Jaylon Smith-led Irish defense didn’t force any turnovers, but they didn’t need to — they simply suffocated the poor Longhorns, who couldn’t muster up 200 yards of total offense or even a measly touchdown. A heaping of credit has to be given to Notre Dame’s defensive coordinator at the time, Brian Va—(I am booed heavily and yanked offstage by a comically large hook).

In retrospect, you have to look back on the 2017 season in a generally positive light, especially when bringing the season before it into frame. But coming into the Citrus Bowl on New Year’s Day, ND’s previous three games consisted of two road spankings (Miami and Stanford) and a home victory in which we struggled to put Navy away. Truly bread and butter Notre Dame November performances, the whole lot. Questions about if the team could ever perform in marquee matchups lingered and another late-season letdown was almost assumed. Sure, it was “just” the Citrus Bowl, but a clutch fourth quarter against LSU went a long way towards righting the ship. In fact, we launched off from that 15 point final period and dove straight into a perfect calendar year that lasted 363 days until, well, you know.

But this game really did put the train on the tracks for the 2018 season it preceded. The dramatic ending is the obvious story, as the Irish finally took the lead for good with a minute and a half remaining on Miles Boykin’s unforgettable 55-yard, one-handed catch and run. The play featured a great, optimistic toss from Ian Book towards the sideline and, of course, an outrageous display of hands and strength from Boykin. It was a harbinger of the outsized roles these future stars would play in 2018. Truth be told, almost everything up to that point was clumsy and forgettable, although some credit to both defenses is due. Justin Yoon didn’t open the scoring until the brink of halftime, after LSU missed two chip shots in the early going. It was easy to take Yoon’s consistency for granted, but let’s give him the respect he deserves, as he was a difference maker in this one and tons of others.

In the end, this was ND football’s biggest postseason victory in more than 20 years. That sounds bleak, but let’s just call it progress. Any chance to stick it to an SEC powerhouse should be cherished, especially for the second time in a row and especially on New Year’s Day.

When Brian Kelly took over in South Bend in 2010, the Trojans were riding an eight game winning streak against the Irish. ND broke the skid in Kelly’s first season, but his tenure leading up to the 2017 game had been marked by narrow victories and lopsided losses in the series. A top-fifteen matchup in South Bend brought with it the highest stakes in the rivalry since the Irish squeaked past USC to secure a spot in the national championship in 2012.

Mike Tirico’s comedic timing on the first series for USC really cannot be overstated, describing Sam Darnold as “just a winner, a terrific athlete” as the Trojan quarterback immediately fumbled his first snap of the game (which literally hit him square in the hands). As the game got more and more out of hand, Darnold’s ability to lead the Trojans to victory from behind was noted first with seriousness, and then with open derision. Any time the announcers became too effusive in their praise for Darnold, he would immediately turn the ball over. By the fourth quarter, Clay Helton had inserted backup QB Matt Fink as a fresh victim for the Irish front four. “There’s no reason to subject [Darnold] to this any longer,” quoth Tirico.

While Sam Darnold was still maneuvering to get the Irish right where he wanted them, Josh Adams and Brandon Wimbush were absolutely pouring on the points. 28-0 at the half. 42-14 to start the fourth quarter. Brandon was excellent, hitting big, early touchdowns to E Street and Kevin Stepherson, and scoring twice more on the ground. The only anxiety Irish fans should have felt watching this game was wondering if they could set the all-time series record for largest blowout, when Ara and the boys put up 51 on a scoreless USC team in 1966. Although this one failed to set records in that regard, it has served to help redefine the state of the rivalry.

Boy was this one [vacated]! Taking to the road against the eighth-ranked Sooners was supposed to be the last major hurdle on the Irish schedule (we certainly did our best to counter that narrative in the few weeks after, but that’s another story). This kind of late-October road win against a premier program had eluded the Irish in the 21st century, and we needed it to validate our top-ten status and stop the incessant buzz about whether Notre Dame itself “belonged” in the national conversation. Joke’s on us, that will literally never stop. Moving on.

Anyone who was on campus at this time can speak to the sense of invincibility that percolated through the student body in a whirlwind couple months. Justified or not, that feeling of inevitability or destiny or whatever it was perhaps reached its zenith during the epic fourth quarter, in which the Irish convincingly did away with the highly-touted Sooners. That buzz even led me, a 19 year old undergrad, to temporarily brave the Backer line with a friend after the game, before we came to our senses and bailed on that idea.

What made this performance even more special and downright fun was how many big plays the Irish made to seal the deal. Oklahoma struck first with a field goal, but Cierre Wood rushed 62 yards up the gut and all the way to the house on our second drive, and we wouldn’t trail again. When Oklahoma tied it up at 13 with just over nine minutes left, the Irish responded with 17 unanswered to close the game out. This euphoric flurry was highlighted by a 50 yard bomb to Chris Brown, a smashmouth one-yard Everett Golson draw into the endzone, a diving Manti Te’o pick, a forced four-and-out turnover on downs, and a shifty 15-yard scamper from Theo Riddick that put the icing on the cake. That’s a lot of highlights, but so be it.

Despite the NCAA Division 1 Committee on Infractions’ best efforts to undo it, this game will never be forgotten. 2012 was touched by some sort of magic, sure, but it was also stressful as all hell, and thorough victories like this were hard to come by. Like the victory against Stanford just last year, it was close until it wasn’t, and that final punch by the Irish was something to behold.

Take the essence of the 2012 season and distill it into a single football game and you’ll get ND-Stanford. After our previous go-round in the student section was bookended by not one but two throw-something-at-your-TV losses on each side of the schedule, the sun had seemingly come out again in South Bend (only metaphorically, definitely not literally). Wins in Ireland, Chicago, and East Lansing, plus a lei’d out Notre Dame Stadium against Michigan (RIP Lennay) helped the Irish jump from unranked to #7 by mid-October. Good things were happening! Gameday was coming to town! Notre Dame was back! Stanford blew one to Washington a couple weeks prior to prevent a proper top 10 showdown, but allow me to get super cliché for just one second and say that nothing was stopping the buzz around campus (we were buzzed most of the time).

For most of the day the Irish were as sloppy as the field itself, fumbling on five occasions and losing three. Everett Golson made some magic, but needed injury relief from Tommy Rees, who went a perfect 4-4 (you’re always perfect to me, Reesus). The defense was even more spectacular, giving up only two field goals all day, even with the extra period. Stanford’s quarterback was some guy named Josh Nunes, which sounds made up, but whatever. (All their quarterbacks since Andrew Luck have been the same person. West Coast-ass Michigan State.)

Of course it went to overtime, and of course the most critical conversion of the day was on a hilarious Tommy Rees back shoulder-ish fade, off his back foot, to Theo Riddick, in front of a couple of suddenly hapless white jerseys. The ball hung dramatically in the air for what felt like several hours, as evidenced by the fact that Theo is literally passing the line of scrimmage at the 23 as Rees lets go of the ball, and somehow ends up with a fifteen yard catch. I swear Tommy legitimately grimaced after he threw it. This play was ugly as all hell and had no business working but it did and I will cherish it forever. 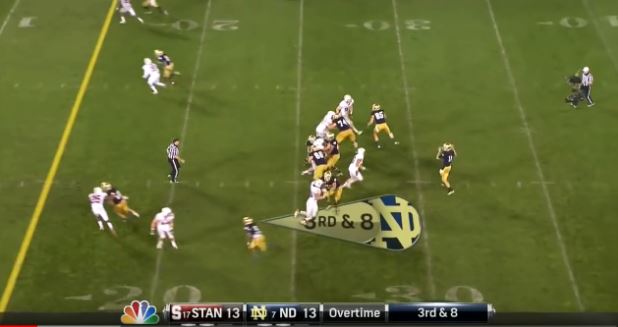 Tommy proceeded to throw a back shoulder slant (???) to TJ Jones for the go-ahead score. And then the defense ate. Stanford threw up sad “touchdown?” shrugs after the final three plays, but no planes were crossed, save for a bunch of kids jumping onto the field to effectively destroy any living natural grass that was left. We screamed and hugged and jumped in the rain, taking blurry pictures in the tunnel because Notre Dame was still undefeated and that’s all we wanted.