Wow, does it feel good to write about an actual game. Irish fans are getting an opportunity to really ease into the season this year, thanks to a tantalizing week zero appetizer and a reasonably hearty week one Thursday/Saturday slate, all leading up to our very own college football Monday. Taking to the road on Labor Day to play an opponent Notre Dame has only faced once previously is a bit of a curveball, but who cares. All that matters is that football’s back, and so are our opponent previews (in a different format this year, because we can only offer up so much novel hate for repeat opponents). Welcome to week one.

Also ICYMI we were guests on the Rakes Report pod and ran through the entire 2019 schedule, from Louisville to Stanford — check it out if you want some additional quick hits on each upcoming opponent.

There’s a Dril tweet for every single situation and person and place in the world. We’re going to assign one to each opponent. You don’t have to get it.

@dominos thanks for unfollowing me. You truly are an ignorant pizza company. Guess were a papa john family now

Let’s do a quick statistical rundown (cherry-picking from Bill Connelly’s season preview) to really set the scene here, because you need to understand how fully and astoundingly Louisville collapsed in 2018 — somehow their 2-10 record doesn’t tell the whole story. Their only wins came against Western Kentucky and FCS Indiana State.  They fell from #14 to #98 in overall S&P+ rankings. They gave up 50 or more points on seven occasions. Their offense dropped ONE HUNDRED spots in the national rankings. Obviously all this resulted in the Cards getting consistently boat-raced on both sides of the ball, as they lost their last four by an average of 45 points, including giving up 77 to the eventual champs.

Honestly, Bobby Petrino should be saluted for his dedication to tanking in a league that doesn’t reward it in the slightest — my reading is that he thought he’d put in enough work to cruise along at eight wins a year, which isn’t at all how college football works, and the bottom fell out all at once (who can relate). Enter new head coach Scott Satterfield by way of Appalachian State, where he helmed one of the better mid-major programs in the country. Time will tell if he’s the guy to bring Louisville back into national relevance. Was their crash and burn due to lack of talent across the board, or was it inextricably tied to Petrino and co? They averaged 8.5 wins over the previous four seasons, so there should at least be something to salvage. 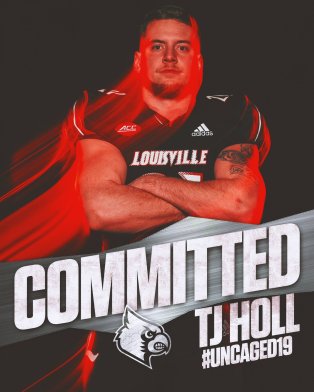 Considering the whole “won two games” thing, it feels right to pick someone who wasn’t on the Louisville roster last year. Holl is a grad transfer from Colgate University and the reigning Patriot League defensive player of the year — no longer top dog in a fairly large pond, but a little fish in a big pond (who’s the real boss, the dog or a fish?). Last year he notched 121 tackles (17 for a loss) and led a defense that allowed under 10 PPG. Colgate’s coach lauded him as being, seriously, “extremely coachable being the son of a coach.” (His dad played running back at Navy.) He’s scrappy! He’s a grinder! Bring your lunchpails, everybody!

A Few Things I Hate About You

Does a primetime slot blackout game count as a hostile road environment if the host was most recently the worst team in an already pretty bad conference? To be determined. The starting QB spot was up for grabs until Monday, as the team entertained a competition featuring the team’s leading rusher, Malik Cunningham, before settling on Jawon Pass (the fact that he’s named PASS and took this long to lock down the starting spot is not a great sign). Receiver could be a strength if Pass can reliably deliver the football, but his accuracy has been rightly called into question, and everything else on offense is a work in progress at best. Satterfield favors a run-heavy approach, but that might not translate with these running backs and this offensive line.

The defense has to dig itself out of Brian VanGorder-sized hole (who can relate), so it won’t get worse, but the rebuilding effort will take time. A bunch of starters are back, but is that even a good thing when they made up the conference’s worst defense a year ago? The secondary could be okay, which would be, relatively, great! Ian Book should shred the Cardinal defense anyway, but if the Irish struggle to run the ball against this front seven, let the alarm bells ring.

As you have certainly gathered from absorbing even one nugget of information about the Louisville Football Cardinals, they are not a good football team, or even an average one at the FBS level. Notre Dame is riding a one-game losing streak, which sucks, but they’re actually good. The Irish will handle a moderately spunky Cardinal team with relative ease. The Julian Okwara for Heisman campaign will get off to a magnificent start. We will go to work on Tuesday morning a little bit hungover, but happy. Irish win, 38-10.

My Morning Jacket hails from Louisville, and unlike the football team, they’re good.