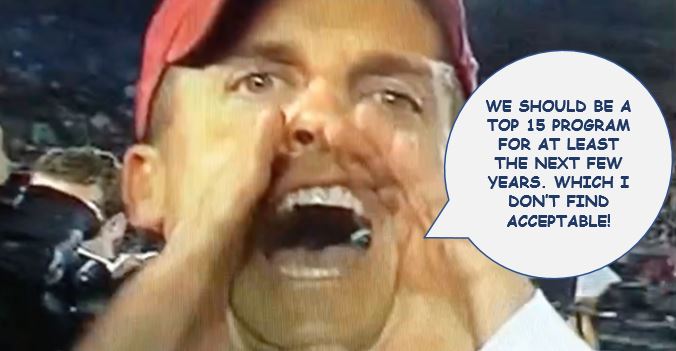 ND going back to natural grass – NOT! april fools (fake news). Metal detectors now the norm for home games. It did exactly nothing to stop Bane. You can also go through the Fat Eddie wet towel gauntlet. Only downside is that it only available to male ticket holders and they must disrobe before entering. “Ravaging” is too strong a word…

Charlize Theron Wants Someone to ‘Step Up’ and Date her. I am relegated to driving a glorified soccer mom mobile. $y wife had a 3 series about 8 years ago. A Nazi car. We only buy Axis vehicles. Crippen ain’t easy.

if you can’t chuck it, tuck it? our running game it limited and cannot be relied upon to work except against teams that suck. Just what exactly does this team do in practice? It consists primarily of fake passes. Our OL probably spends almost 80 percent of practice time on pass blocking. chicken shit offense sucks arse.

Can someone knowledgeable provide a few sentences describing the offensive schemes of the following teams? 1) Notre Dame 2) Alabama 3) Clemson 4) Ohio St 5) Oklahoma. I think I can help with this: 1) Chunk play asshattery 2) Real offense 3) Real offense 4) Real offense 5) Chuck it all over the yard, without the asshattery. Championship level offenses my ass.

Can someone knowledgeable also explain how Kelly’s chunk play asshattery is different from Weis’ chunk play asshattery? I haven’t been keeping records, but it seems like we lob up the fade just as much now as we did back then. Is it just that everything’s out of the shotgun? Ten years in and I still can’t tell our identity.

Is Jeff Quinn a good OL coach? If he is, then we should be a top 15 program for at least the next few years. Which I don’t find acceptable….someday, we’ll get a coach who understands ND’s strengths. It feels like one year under Kelly is like three years of normal time. Anybody can coach Notre Dame. It’s the University that makes the a’hole. That’s the whole point,you mental midget. I don’t get it. And I really don’t like it.

My confusion stems from the apparent verdict that Book remains the choice as the starting QB. Jurkovec’s personal trainer from high school speaks highly of his work ethic. heaven forbid Kelly’s QB is allowed to think and play outside the tidy little box Kelly has built for him. Can Kevin Austin throw an accurate deep ball? If he can only catch the deep ball, I’m not sure his “coming on” means much.

Why does it always seem to take so long for our QB’s to grasp Kelly’s rinky-dink offense? Is The Offensive Guru’s system so sophisticated that it can only be understood by the most enlightened? Not just QBs either. Name a position and it seems like it takes years for a player (there are exceptions, of course) to be ready.

Now, I realize that it’s not 1988 anymore. But is it now impossible to get line surges? Flat backs, firing off the ball, moving guys back 3-5 yards, and then falling on them and going crotch to face when you get up. a stir in his loins, beautiful. Downright savage compared to today’s sumo wrestling and patty cake style. A big thing that has changed, obviously, is the shear size of the players. Kelly seems to turn them into goo.

ND does not graduate the number of high school teachers as of yore. Catholic schools are our natural recruiting base. If we truly “owned” Catholic schools nationwide, we would definitely have the talent to make a championship run almost every year.

4-star WR Jordan Johnson just committed to ND. And he’s a Catholic. I’m glad we got back in there, Weis had poisoned the well for a long time. did Weis poison the well with his excess amount of Coors Lite or with his double roast beef/extra mayo Jimmy John’s sandwiches? He thought the well was a toilet, you dork doofus.

B-G Game…Who’s Going…the gang will be their. Gated tailgate with the Blackhawks flag. No Amish allowed. Word on the street – Bonger will be packing heat at tailgate. Only Question remains – Is he expecting trouble on Saturday or looking to start some? I came here straight from the Bahamas. Been drinking Ultras and chewing Skoal for a week now at the Backer. And I didn’t spit.

Sounds like a  fight to get back to the standard 8-4 team to me. Hope I’m wrong, but probably not. No interest whatsoever. Eyes glazing over.