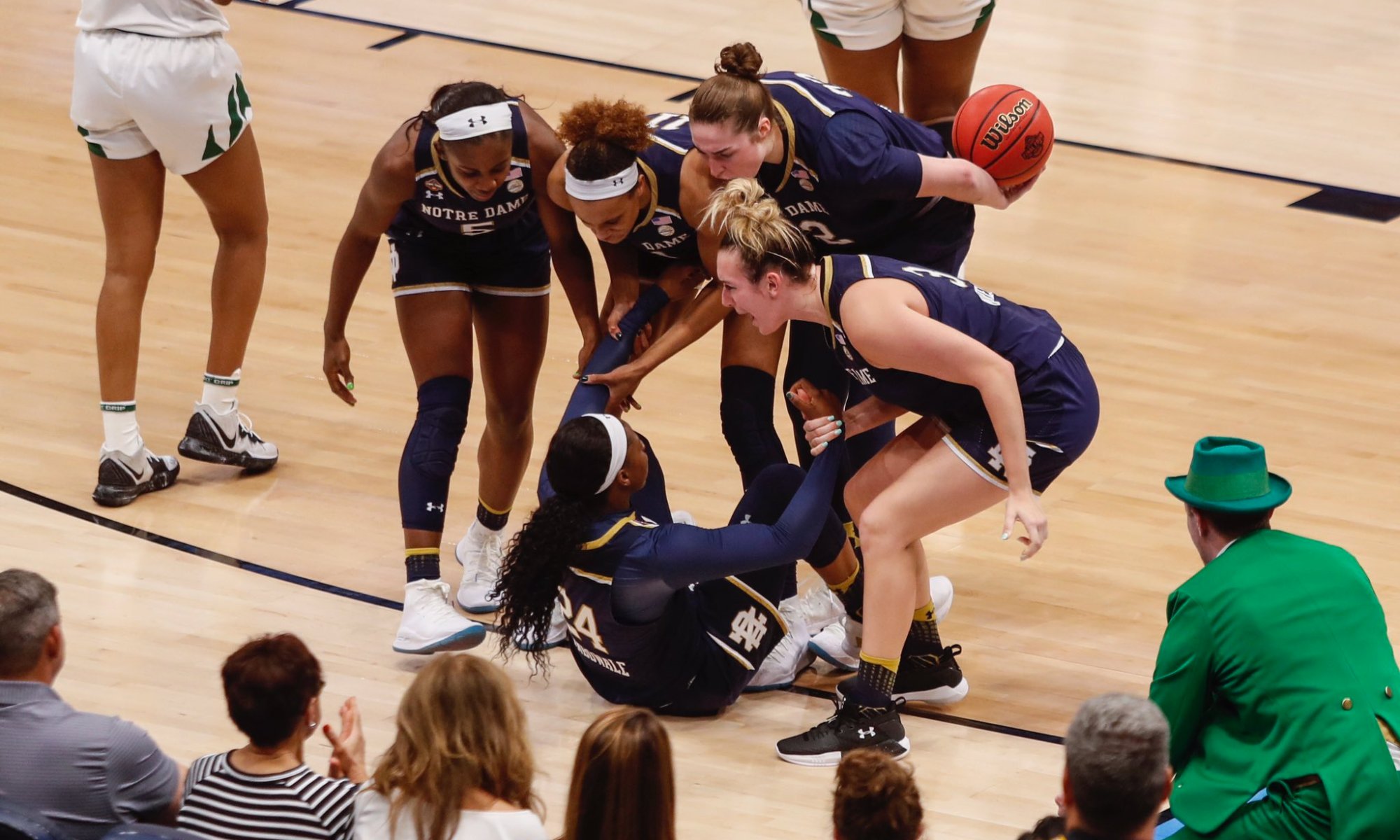 One of the truest and best compliments you can pay any team is that they remind you why you watch the game — why sports have any inherent value at all, why we give a portion of our lives year after year. If there’s ever been a group worthy of this praise, it’s Muffet McGraw’s team, one that was helmed by no fewer than five bona fide Notre Dame legends. Writing about them right now is hard, and I don’t blame anyone who doesn’t want to click on any NDWBB content for a few days or weeks. But one point doesn’t really change their legacy all that much. We don’t watch because we expect back to back runs to the championship game, or because we expect a win on the highest stage in the most dramatic fashion, but that’s what they gave.

While we’re on the topic of reasons we watch sports, look no further than Marina Mabrey’s performances to close out the season. Through late March it looked like she might end her ND career on something of a sour note, as she struggled to find her shooting touch for most of the tournament. Against UConn all she managed to do was set the NCAA record for most assists in a Final Four game, and match that number with 12 points. And then she hit four 3-pointers, all bigger than the last, to claw the Irish back into the thick of it against Baylor. Absolutely icey.

We all know last year’s team won the title while racking up more ACL tears than losses, acts of God somehow mitigated and overcome by the unending drive of a few college students. It’s cruel, though, that one of them belonged to Brianna Turner. She deserved to be a centerpiece of a championship team. But she graduates with a ring and a fittingly iconic moment, her block that (literally) single-handedly ensured UConn’s season came to an end in the semifinal.

The silver lining is that Jessica Shepard was able to fill that void and then some. Without her, there’s no ring — Muffet’s said as much. In just two years, she emerged as an absolute stalwart. We’ll miss her endless offensive rebounds and putbacks and her surprisingly potent mid-range game.

Jackie Young (please come back, Jackie, please) may have saved the season against Stanford, effectively functioning as the team’s entire offensive engine. Her squirmy finishes in the lane, almost always drawing contact, changed the game. Even with one year of eligibility left, she’s projected as the #2 overall pick, and will announce her decision today. Either way, her legacy is set.

That leaves Arike. Big picture talk is no immediate consolation after a loss like that, but let’s run through it anyway. She’s the greatest player in the history of the program, with the greatest individual feat in…maybe…college sports…ever? Ice Twice is one of the most insane things I’ve ever seen in my life, and that effort alone would merit a statue. Leading Notre Dame in all-time points does too. One free throw miss aside, she was the main reason the game was even a game at all. 31 points, 0 minutes of rest. She shrugged off the narrative about her slow starts and just kept scoring when no one else could. She’s the greatest, and the minute she gets drafted I can’t wait to order her jersey (YOU HEAR THAT, UNDER ARMOUR/ND ATHLETICS/HAMMES BOOKSTORE?).

Yesterday also reminded us why sports can be pretty damn bad, too. I’ll never forgive that rim for its unwarranted cruelty to Arike in the most crucial moment (yes, I’m blaming a piece of steel, step off). As the final horn blew I Irish exited from the bar, sullenly walking home and personally identifying a little too closely with the lyrics “I hope the world explodes / I hope that we all die / we can watch the highlights in hell / I hope they’re televised.” But that was yesterday and now it’s today, and today is when we thank these girls for being the best basketball team this school has ever seen. We watch because they might just come back from 17 down in the national championship. We watch because they might just hit a buzzer beater or two to win it. What more could you want?