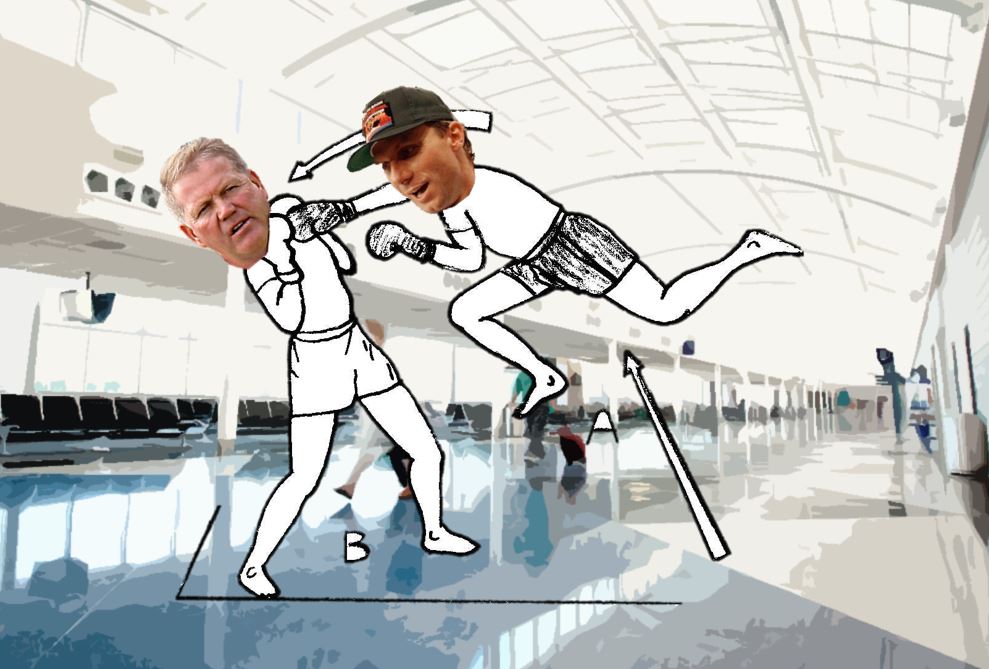 So disappointing. To come into work, sit down with a cup of Joe and a danish, and then open “Rock’s House” and find NO new postings since early yesterday afternoon. Come on people, you need to step it up. Jerk off, then decide. I know it’s the really off-season but surely there is something to say. I believe Rock’s House exists for all! A force for good in the world.

Saw Joe Montana at my airport recently. Joe is not very happy with BK! He said if BK was in front of him he would knock his lights out. Swarbrick would never fire Kelly no matter what he may say or do to further embarrass the University. he’s probably got his statute not only designed but sitting in cold storage somewhere in a secret, deep, dark, dank dungeon in the bowels of Campus Crossroad.

If Savvy weren’t so f’n lazy, a d’bag, and full of $#it, maybe we’d have a chance of selling the joint out. insulting to anybody with an IQ above 67. would tickets sell better if you had a different head coach and the Irish Guard hadn’t been emasculated? Go fist yourself Jack.

They are laying grass in ND Stadium for the soccer game. This reopens an old wound. While I believe we landed on the moon, the conspiracy theorist in me strongly suspects there’s something sinister just beneath the surface allowing Kelly to survive and dictate football decisions outside his pay grade.

What a a giant, festering, greasy shit sandwich, served with a knowing, defiant, arrogant, who gives a shit about alumni smile by the greatest athletic director there is, without question. Kelly really needs to be called out on his insanity and his ineptitude. This is how Rome burned while Nero played the fiddle. it’s time to just shut down the program. It is a turd. Some people just love chowing down on the warm bowls of shit served them by ND’s leaders.

Night games on School nights. who wants to play a college football game on a Monday night, on the ass end of a holiday weekend? This definitely contributes to why my sons have no interest in football. Night games decrease the chances of my watching them as they are played. so does our offensive style. it ruins the entire day (no nice dinner in Chicago after the game, etc.)

I plan to be somewhere in Florida drunk and sunburnt, hung over to the bejeesus, overdosed on warm beer and hot browns. Only rivaled by pillow biting prior to Bowling Green while dropping the other Hot Browns in johns. there’s only one can so not the best for the ladies. go shit in a hat.

Who cares about the putrid home games? Georgia will beat ND soundly. UM will stomp on us. I don’t care about the rest of it. We won’t be able to run for shit against teams that don’t blow goats. Weed Eater Bowl, here we come…a true Swarbrick festival of Midwest fart smellers.

FUCK MICHIGAN & Jim Harbaugh. He deserves to sleep in or on Ann Arbor. Ann Arbor is a whore that just keeps on giving, blow-jobs, etc. Like the Democrats, who are Catholic, and don’t have gonads. Instead, like gutless bondage slaves, wearing bikinis and having a gag stuck in their mouths’, they vote like their S/M mistresses demand.

We used to adhere to a different, more dignified set of scheduling principles that set us apart from the rest of the trash and riff raff and degenerate and low lifes of college football. we abandoned each of them. one by one. now we are fungible. bring on the shit games and crank up the ozzy and smoke machines.  I wish the color gold was not associated with our school. Something timeless like the look and feel of the glimmering golden dome has now been cheapened to the class level of gold plated teeth. Sickening is a word comes to mind. Cheap, tawdry and tricks are others.