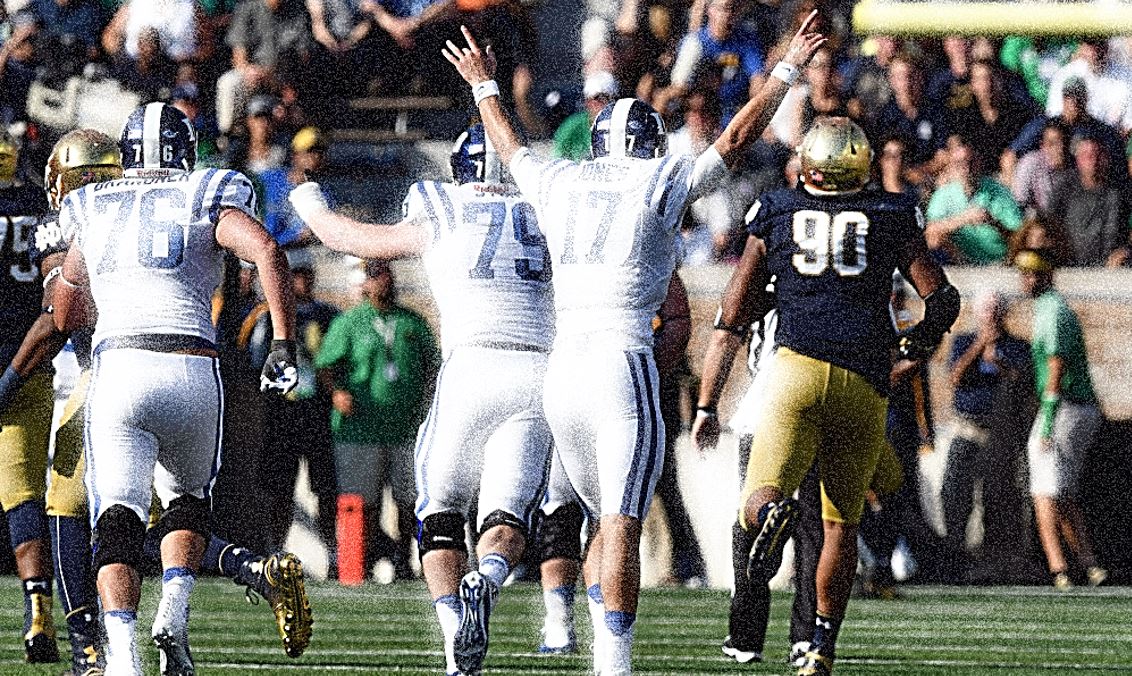 What does a worst-case scenario look like for Notre Dame football in Brian Kelly’s tenth (!) season at the helm? Odds are when you hear “worst-case” and “Notre Dame football” in the same sentence, the 2016 debacle comes right to mind. That group statistically should have finished closer to 7-5 than 4-8, and is hilariously nestled between a couple eight- and eleven-win squads in the recently updated S&P+ rankings.

Rest assured, though — the Irish team that will emerge in three and a half months will have a considerably higher floor than the one that slogged through 2016’s misery. The most obvious reason is simply that former Defensive Coordinator Brian VanGorder has relocated to another sideline. Having a clear-cut, eminently reliable starter at quarterback also helps, as those Irish of old were hindered by a locker room divided by the Deshone Kizer/Malik Zaire debate (I would say that looks dumb in hindsight, but it was just as dumb then). This team is also, well, more talented! Its predecessor won 12 games last year, duh. So what would a worst-case 2019 season look like? Without falling too deep into the “every important player gets injured” trap, let’s dive in.

If we rely on current S&P+ projections, the Irish have at least an 80% win probability in five games — @ Louisville, New Mexico, Bowling Green, Navy, and Boston College. Despite these comforting odds, a nightmare scenario where an underachieving Irish team loses to a “scrappy” Navy or BC is a bit too familiar to the Irish faithful. There’s a reason the odds aren’t 100%, because college kids are college kids, any given Saturday, yadda yadda, but a loss in any of these matchups would be an unmitigated disaster. Nah. So what would it take to lose to our other non-Bulldog or Wolverine or Cardinal opponents?

The obvious boogeyman here is injuries. What would losing Ian Book do to this team? Nothing good! You can blame the coaching staff for failing to develop him quickly enough, but by all indications Phil Jurkovec does not look ready to handle anything close to the majority of snaps under center. Odds are the season’s first quarter ends at 2-1 regardless, but if Ian gets hit with a serious injury around, say, late September to early October, it could easily cut the win total clean in half. (Sorry to make you think about these things! It’s only spring, you’ll get over it.)

On the offensive side of the ball, the only other individual that is nearly as dispensable as QB1 is Jafar Armstrong. That’s big talk regarding a player who only managed 542 yards from scrimmage last year, but the offense needs to be able to use him creatively out of the backfield a la Theo Riddick or it will suffer greatly. A backfield of Tony Jones and a handful of promising but undeveloped youngsters simply won’t cut it, as defenses would zero in on Book and surely reduce the passing game’s vaunted efficiency. Jafar’s myriad injuries last year are now one of the most concerning storylines as we head into the 2019 season.

Defensively, the Irish similarly cannot afford to lose Troy Pride. In the wake of Julian Love’s departure, Pride, who didn’t allow a touchdown in 2018 until his final meaningful regular season snap, needs to be similarly lockdown at field (assuming that’s where he generally sticks) corner this year. There’s talent at boundary and nickel corners, but questions abound, and without Pride as the rock, the situation gets a whole lot shakier. Losing any one of Julian Okwara, Khalid Kareem, Alohi Gilman, or Jalen Elliott would hurt, but the beauty of these duos is that depth on the other side could at least partially mask that hit.

Notre Dame’s achilles heel almost certainly looks to be at linebacker, and the loss of Te’von Coney and Drue Tranquill is exacerbated by Jerry Tillery’s departure — with some solid but unspectacular replacements in the middle of the line, there’s the possibility that they could get gashed up the middle by quality running games (thankfully, only Georgia, Michigan, and Louisville ranked top 50 in rushing S&P+ last year). The best thing I can currently say about the linebacking corps is that it’s full of replacement-level bodies that should be able to jump in in the event of an injury.

If there’s good news about rushing offenses to be faced, that gets flipped on its head when we examine the passing game. Six opponents were top 50 last year (Navy is in and USC is out — cool math, nerds). Can we count on Shaun Crawford staying healthy? No. Can we count on Houston Griffith, talented as he is, to smoothly transition from safety to corner? Jury’s still out. Can we count on the linebackers to be reliable in coverage? We don’t even know who the starters are. Tariq Bracy flashed but lacks size, Donte Vaughn’s sample size is small and subpar — it’s easy to envision opponents more or less ignoring Pride’s side of the field and picking on less experienced defenders. Forget Trevor Lawrence against a Love-less secondary; rewatch the first half of the USC game, one in which they negated the ND pass rush with quick, pinpoint passing, and you have a blueprint for how to attack this defense.

And while I’m generally bullish on the offensive line, one that’s chock full of returning starters, coalescing into a more effective unit, that’s no guarantee. Injury-prone utility man Trevor Ruhland and Josh Lugg are suddenly the only reserves we can feel fully comfortable plugging in if a starter goes down. Four opponents had a top 50 havoc rate, and that doesn’t even include Georgia’s eighth ranked defense. Hopefully iron sharpens iron in practice, but they did get absolutely worked in pass protection by the defensive line in the spring game.

We do need to also mention the coming storm that is special teams. Justin Yoon and Tyler Newsome are gone. Jonathan Doerer was a disaster kicking the ball in limited action last year. Jay Bramblett will hopefully be serviceable in punting duties, but Kelly and Chip Long will probably be forced to take a lot of chances on fourth down (which is not a bad thing!). There’s not much to do at this point except pray these units don’t outright lose the Irish a game or two.

An unfortunate quirk of this year’s schedule is that seven teams will be coming off a bye week when they play ND. That’s an extra week to rest and potentially throw new schematic wrinkles at the Irish (think the defensive ends dropping into coverage that gave Ian Book fits last year). Virginia is a potential top 30-ish team that comes to town the week after we travel to face the probable third best team in the country. It hurts to even point this out, but the Irish haven’t won in Palo Alto in 12 years! ND also overachieved in terms of close game karma last year, winning each tight matchup and beating its expected win total by almost two full games. And Michigan is going to employ a dangerous new spread offhahahahahaha couldn’t do that with a straight face, sorry, no.

So what does the worst case scenario look like this year? Injuries at the quarterback and/or running back positions hamper the offense’s ability to move the ball against top tier opponents and keep games against mediocre competition too close for too long. The offensive line doesn’t gel as expected and the running game continues to be the bane of the fanbase as a whole. Linebackers rotate in and out with varying levels of effectiveness. Pressure generated by the ends isn’t enough to negate inconsistent corner play. Special teams is a full-on catastrophe. If the team’s win probability takes a 25% hit on a week-by-week basis (not a particularly scientific guess on my part, to be fair), expected wins fall from nine to seven. And like I mentioned earlier, an early injury to Book could plausibly lead to a .500 season.

It goes without saying that no alum, fan, coach, or player would be satisfied with a 7-5 regular season record. The program would be taking a clear step back, recruiting momentum would stall, and Brian Kelly would have a lot to answer for. But as far as worst case scenarios go, it’s not the, uh, worst? Avoiding the depths of 2016 and 2007 and 2003 aren’t goals to hang on the wall of the Gug, but they don’t need to be. Most, if not all, of the above shouldn’t come to fruition, and the momentum generated over the past couple years should keep rolling right along. I feel the need to thank you, reader, for making it through this masochistic thought experiment — we’ll be back with a far rosier one before long.