On the eve of yet another college football season, rational and attentive observers have to admit that, in the modern era, teams live and die by their ability to both advance and stop the pass. Simply put, football as we currently know it is a passing man’s game. It may be confessed through gritted teeth and cries to run the damn ball and yearnings for three yards and a cloud of dust, but the point must be conceded nonetheless. A disproportionate burden of Notre Dame’s 2019 playoff hopes will be placed on Ian Book’s shoulders, and on the line charged with keeping him clean, and on Julian Okwara and the Irish pass rush to do the inverse to opposing quarterbacks. All true.

But! But. Ian Book is not perfect. No offense can function at a high level throwing the ball every down (yet). Dynamic running backs, arguably even moreso in college football than the pros, can still have seismic effects on a game or season, and are far from extinct. But! But. Dynamic running backs are not everything — look no further than Notre Dame c. 2018, who featured (for nine games) an absolute gamebreaker in Dexter Williams. Dex made an impact from his first to last carry, but you wouldn’t know it by looking at ND’s place in the national rushing rankings. His explosiveness masked an underlying problem — the Irish simply could not Impose Their Will on opposing defenses with much frequency, and struggled to run the ball consistently as a result.

That Notre Dame team ranked 72nd nationally in rushing S&P+. Bleh. Luckily for us, Football Outsiders tracks offensive line advanced stats, which are a real thing, back to 2014. I chose to investigate with these statistics, a spreadsheet, some graphs, an-hey now, come on, come back here, please stay, looking at math is good for your brain, probably.

Yikes! Look at this chart without context and you’d never, ever guess that the 2018 team was the one to lose zero regular season games. These are numbers that make you blink and double check that you pulled the right figures (which I did). Things would surely look marginally better with a full 13 games of Dexter Williams and Alex Bars, but suspensions and injuries come with the territory. Can we glean anything from these categories? Let’s pick a few interesting ones.

One that stands out is this precipitous drop in Passing Downs Line Yards, which are essentially the yards that the offensive line gets “credit” for on runs on 2nd/3rd/4th and long. 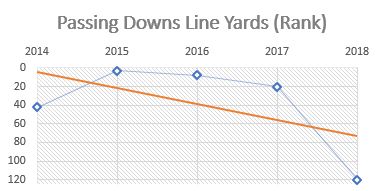 Unsurprisingly, an offense featuring DeShone Kizer, C.J. Prosise, and Josh Adams running behind Nick Martin, Mike McGlinchey, and Ronnie Stanley was dynamic enough to pull the rug out from under opponents and run effectively on passing downs. Last year’s was…not. We have to hope that an unleashed Ian Book will keep defenses on their toes and scare them about getting beat over the top. That added facet should compound a creative scheme from Chip Long that blurs the lines between running and passing personnel. This is more or less predicated on Jafar Armstrong staying healthy, plus a robust contribution from a young receiver like Lawrence Keys running jets sweeps and the like.

Perhaps even more concerning is Opportunity Rate, a measure of if the offense gets at least four yards when four yards are “available” (vague, I know, but it’s a basic approximation of if the line and backs are doing their jobs). 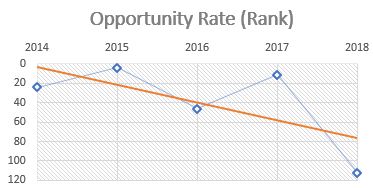 2016 is an aberration when compared to the previous data set, but isn’t it always. Far be it from me to have an actual diagnosis for this plunge, but whatever the reason may be, the trend line says it all. The obvious problem is that losing Quenton Nelson and Mike McGlinchey sucks! Duh! Same for offensive line coach Harry Heistand. Jeff Quinn’s done a great job on the recruiting trail, and his seat isn’t quite hot (do we talk about position coaches’ seats like that?), but he needs to ensure that Eichenberg, Banks, Patterson, Kraemer, and Hainsey are a cohesive group this year.

This has been a decidedly un-sexy post so far, so you’ve earned some good news, and even that good news is a bit of a surprise. Power Success Rate, or the percentage of runs on 3rd/4th down with 2 or fewer yards to gain that result in a first down or touchdown, was a strength last year, beating out the 2015 and 2017 powerhouses. 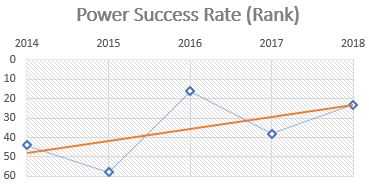 Somewhat contradictorily, this is despite the horrific rate (almost 25% of all rushes!) that Irish backs got stuffed at or behind the line of scrimmage in 2018. If Quinn and co. can limit those no-gainers and let Ian cook a little on second and short, this is going to be a scary offense. And with questions at the specialist positions, let’s hope they can keep converting these high-leverage short yardage scenarios.

All these ups and downs led to a statistically middling rushing game, far removed from the respective #2 and #4 ranks for ‘15 and ‘17, even with Dexter regularly exploding for long scores. As best I can tell, the remedy is a more seasoned offensive line no longer working under a first-year coach, an improved deep passing game that opens up the field, and playcalling from Chip Long that keeps the opposition on its back heels.

Overly simplistic? Maybe. Easier said than done? Absolutely. But we won’t quite know how the staff plans to mitigate these downward trends until mid to late September — what Lance Taylor will bring to the table on gameday remains to be seen. Like we said at the start, though, it’s a passing game, and each method of moving the ball plays off the other. Run the damn ball…when it makes sense.

One Reply to “Run The Damn Ball?”